February 12, 2018February 12, 2018
I work in the town of Kailua, which is on the windward side of Oahu. I spend my whole work week in Kailua, as both my jobs are there. Kailua is a beautiful town to work at because the scenery is so beautiful there. I get a great view of the Ko’olau Mountains and my school is ten minutes away from Kailua Beach and Lanikai Beach.
Though, even with those beautiful backdrops, I would never spend the weekend in Kailua unless I  had to. I’m the kind of person that would rather avoid my place of work if I am not working. I’d avoid the entire vicinity because I like to disassociate my work life and my private life.
Today, though, I spent the morning in Kailua. My work partner, Kevin and I have plans to take part in the community’s farmers’ markets with the yogurt shop. 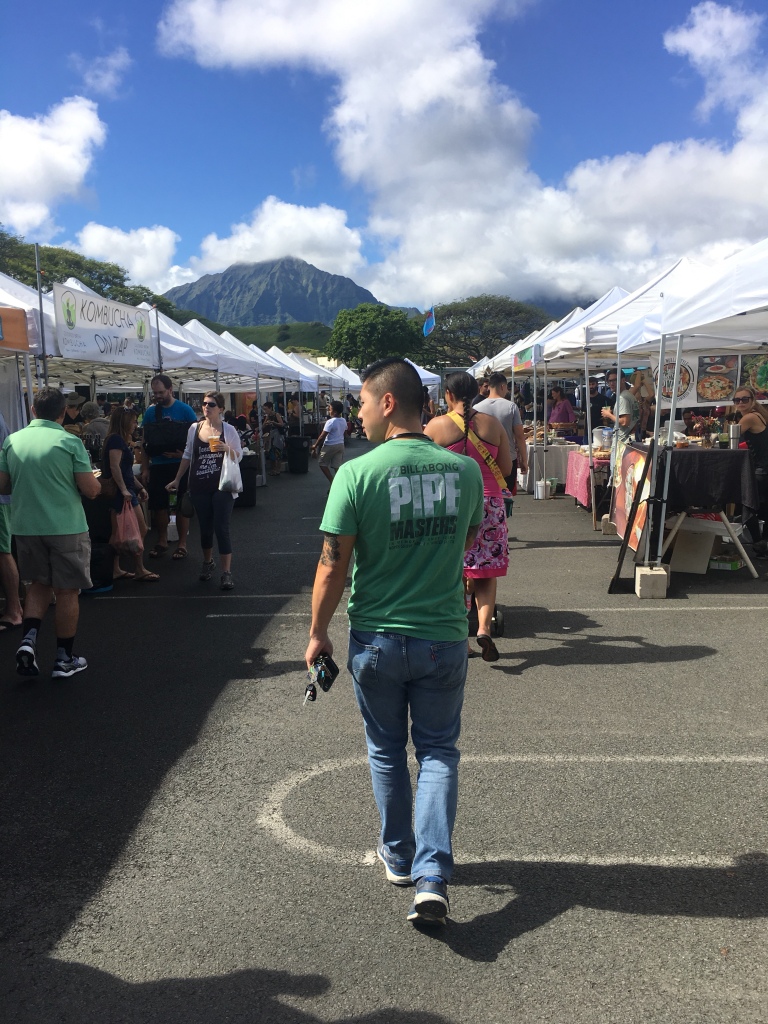 Here’s Kevin checking out the first row of vendors at the market.

The first row of vendors had a few farmers with produce, as well as some food vendors. There was even a coconut booth, Hawaii Roots and Branches! This man, Hanz, sells coconut juice in the coconut itself or by the jar. It reminded me of my childhood when my parents bought me coconut juice just like that. If you can see in the picture, you can drink it straight from the coconut. What he does is chop off the top and cuts a hole into the meat, sticks a straw in, and voila! You can drink it!

Since Kevin and I did a lap around before returning to vendors we wanted to speak with, I decided to wait before I bought myself a coconut. But then, I got distracted by a coffee stand and bought coffee, entirely forgetting that I meant to buy a coconut drink! So…no coconut juice for me. ::sad face:: 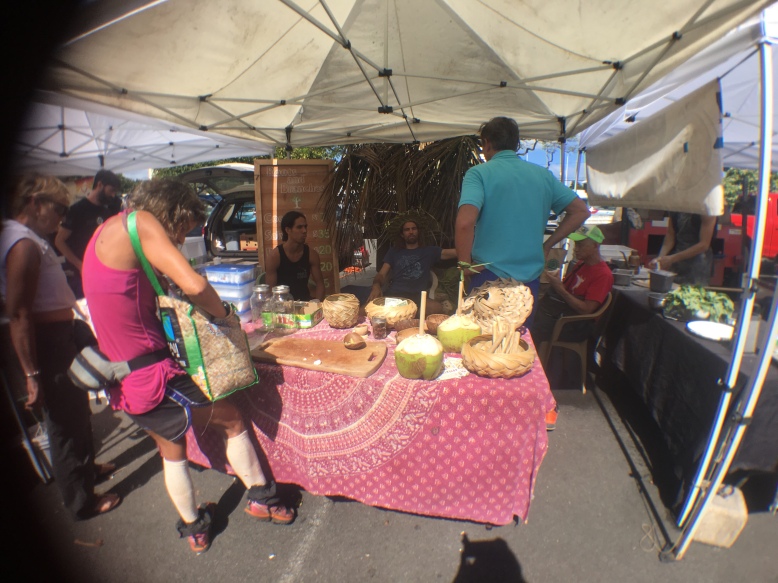 A better view of this setup.

This row had also had the biggest jackfruit I’ve ever seen. 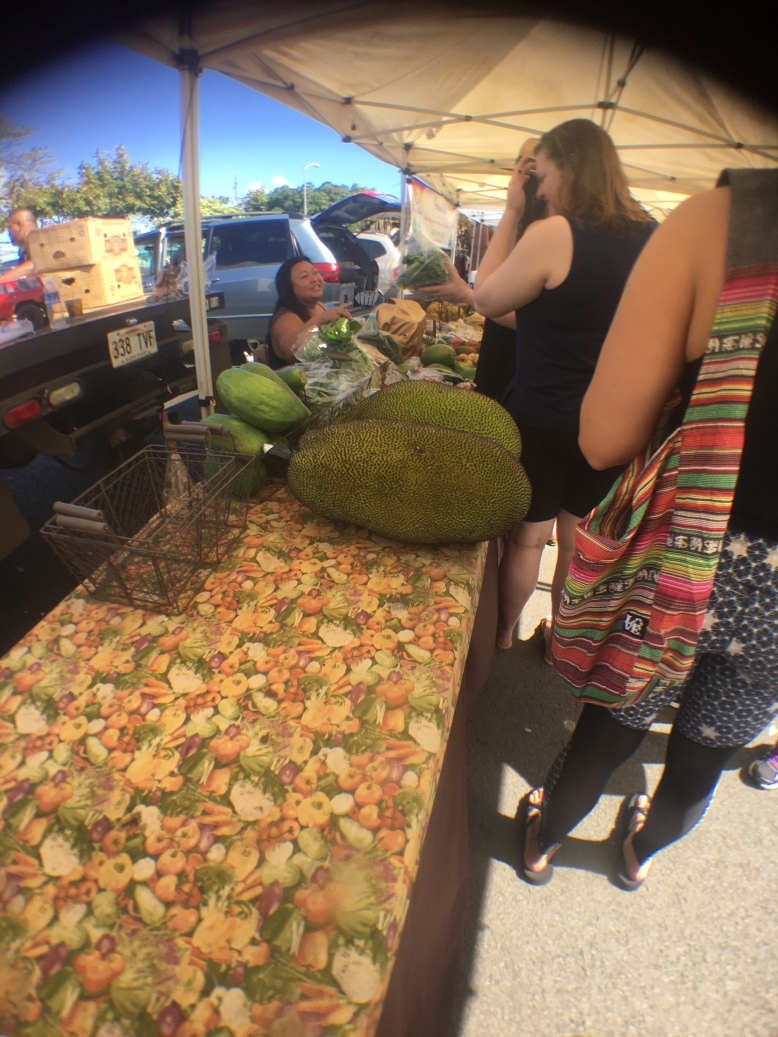 I might’ve been hard of hearing, but I swear I heard they cost $50. It could’ve been $15, but I walked away because jackfruit isn’t my jam. 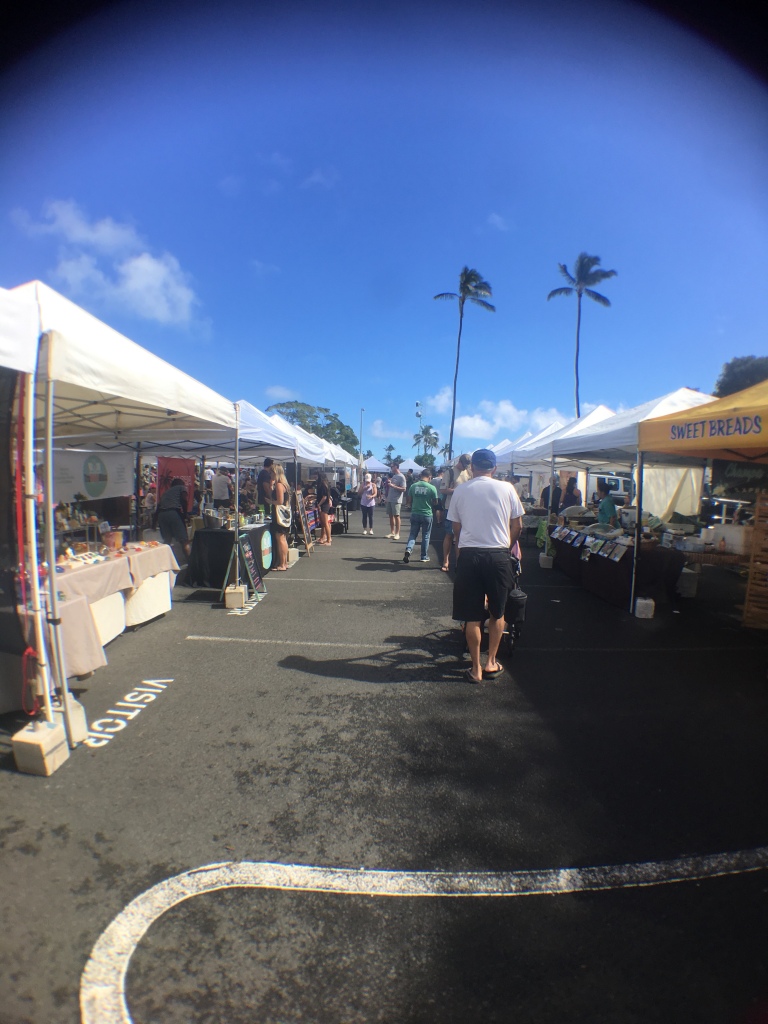 This is the second row of vendors. There were more food vendors in this aisle, as well as some selling jewelry and accessories.

This was the “entertainment” tent, where there was live acoustic music people could enjoy as they sat and ate their brunch. 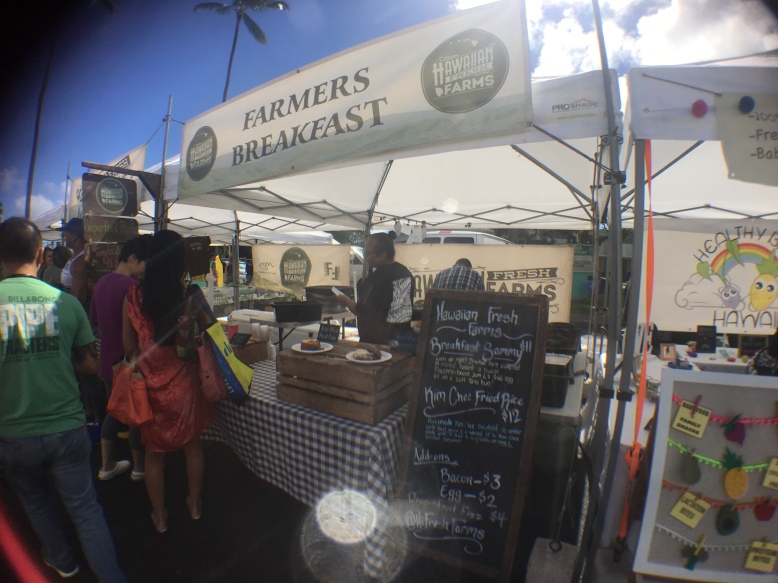 Farmers Breakfast. Kevin and I had buyer’s remorse in choosing other items instead of coming here to eat. He wanted the Breakfast Sammy. I was enticed by the Kim Chee Fried Rice. 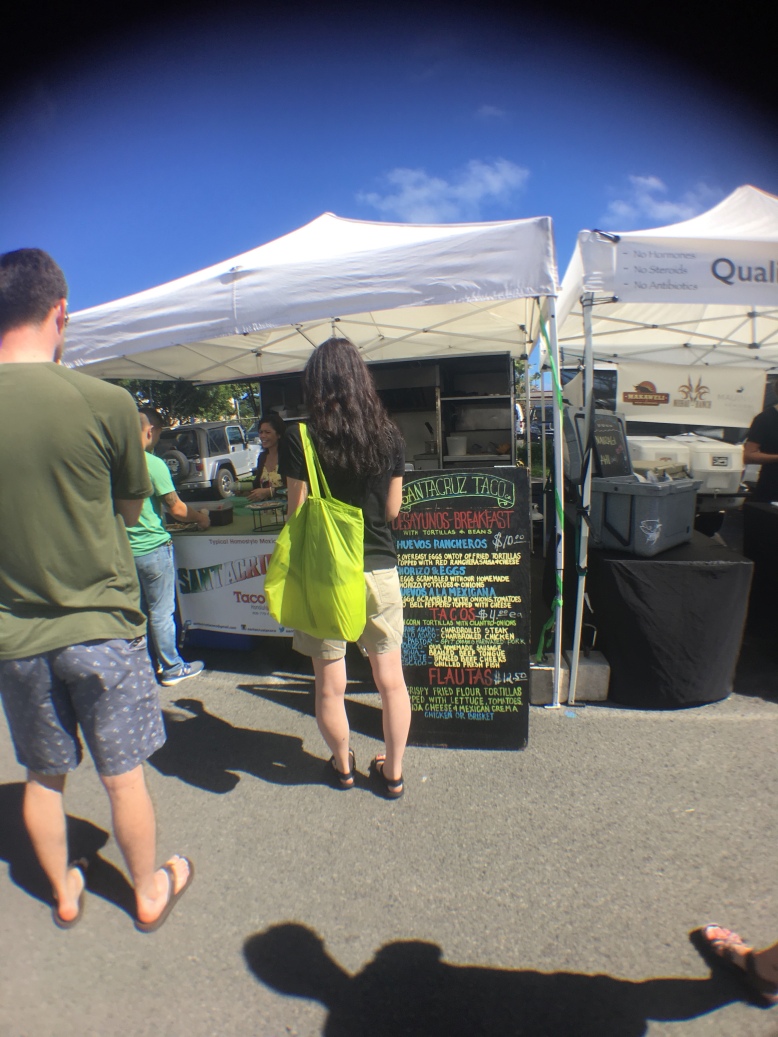 This is where Kevin actually ate. The man cannot avoid tacos.

Meanwhile, I opted for coffee. 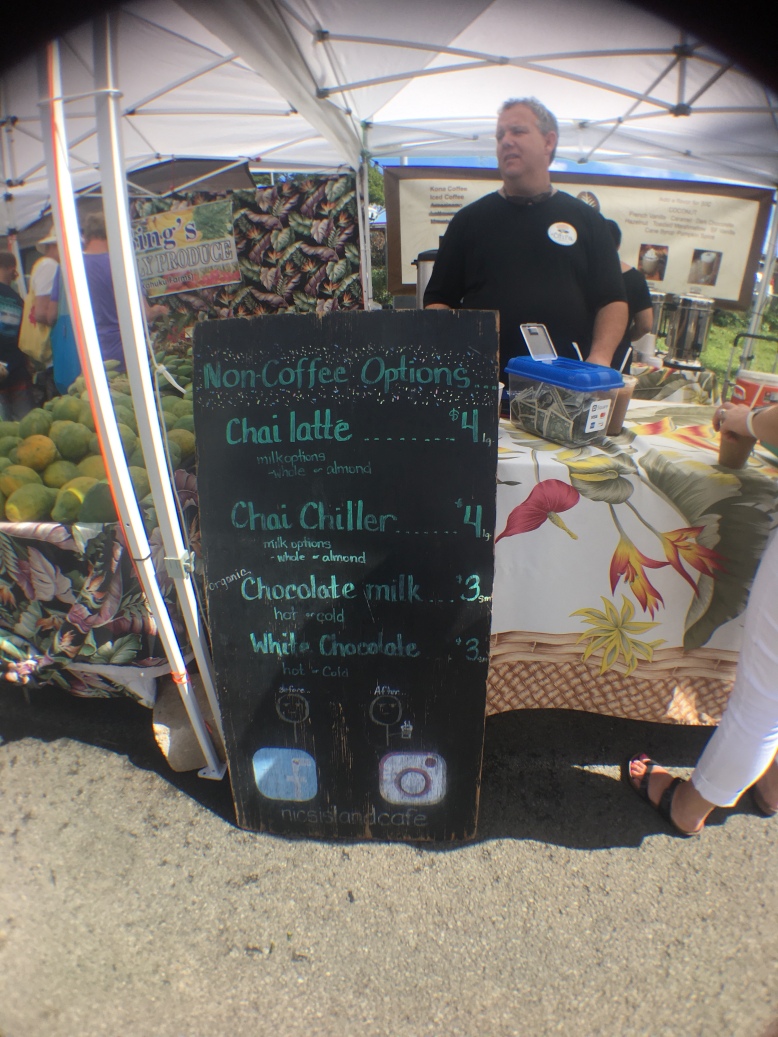 I chose coffee from Nic’s Island Cafe over coconut juice.

What I liked about KailuaTown Farmers’ Market is how family-friendly it is. I don’t have kids, but I have a lot of friends and family who do. So I thought this was a nice touch to make this a more family-oriented destination. 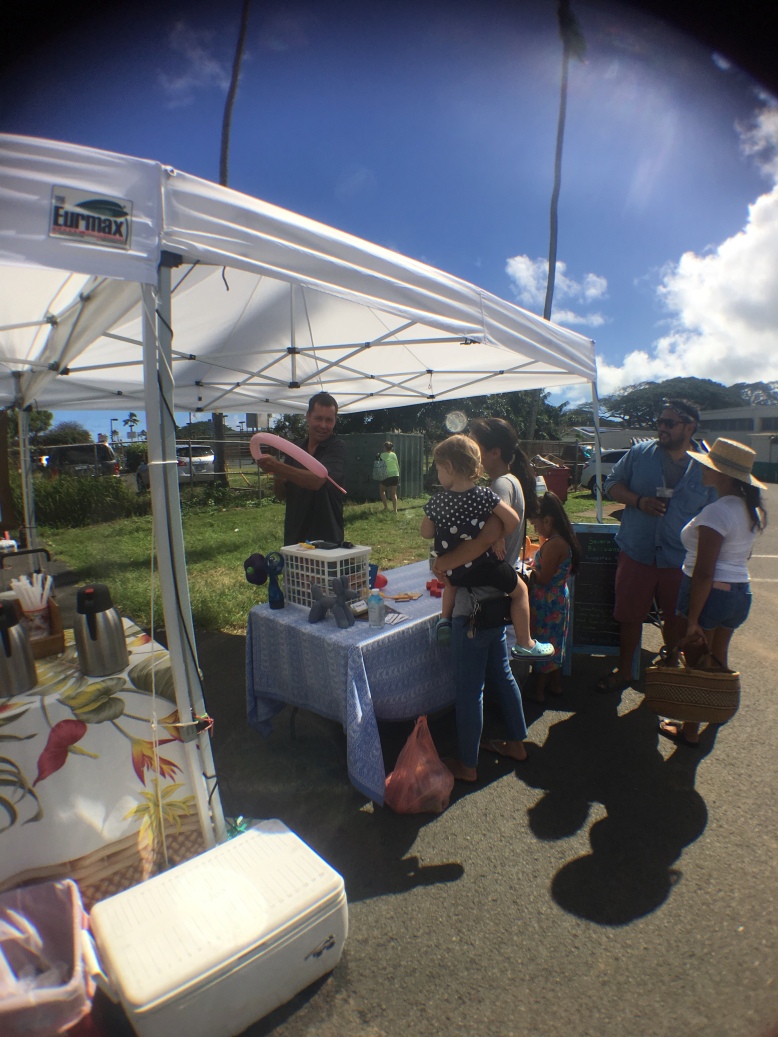 They also had balloon artist at the market. I really wanted a balloon, but I had to be professional.

There was also a Keiki (child/children in Hawaiian) Korner tent set up on the side. Also, since the market was held at the school, many parents brought their kids over to the playground. Family-friendly indeed!

Keiki Korner for kids to do crafts.

A faraway shot of the playground. Also, lots of lawn space for people set up picnic blankets and relax in the sun.

We found a tent that served honey slush, kind of like ice cream, kind of like shave ice. Kevin got a honey pina colada. The owners of this business have a bee farm out in Wai’anae and don’t have an actual storefront. They travel to farmers markets to sell their products, as well as use a bicycle cart and as they explained, “Ride it up and down the North Shore.” Cool to check out. The honey really enhances the flavor! 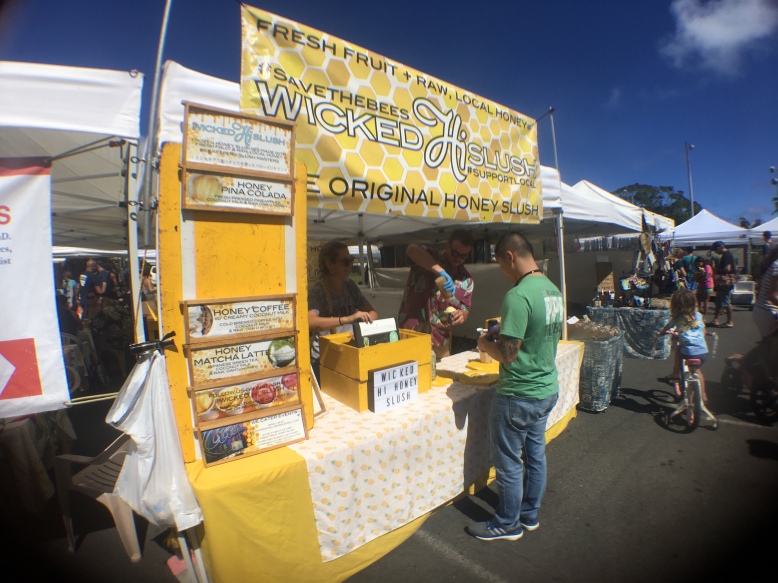 Smoother than shave ice. Nice to have a cold treat because today was particularly hot.

The first vendor we talked to was Dale of Hippy Chic Designs. She makes belts, wallets, and dog leashes among other things. Her Hippy Chic Design products are on the left of the picture.On the right side of the picture is her HERO designs. These are belts, key chains, and wallets she makes out of recycled fire hoses.

“Made from Fire Hose” caught my eye so quick!

All those belts are made out of fire hoses. She also made a footstool (on the left) out of the outer layer of the fire hose. Pretty neat!

These belts are made out of ribbon, but they’re still pretty impressive!

And that’s a wrap for me at the KailuaTown Farmers’ Market. Sorry about my lousy camera work. I’m still trying to get better at it.

If you are interested, here’s a bit more information about the market. Kailua actually has two farmers’ markets. Kailua Farmers’ Market is on Thursday nights in the parking lot of Kailua Town Center, from 5pm to 7pm.

Kailua Elementary School, from 8am to 12pm. Parking for the KailuaTown Farmers’ Market is on the school campus, but there is limited spacing. I think you can also park next door at the Kailua Recreation Center. There’s also street parking that is free on Sundays.